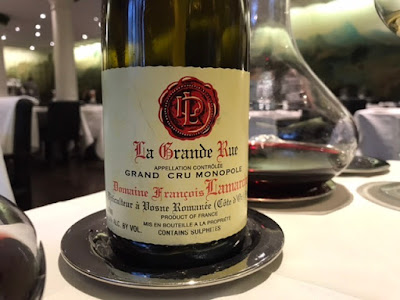 Tasted blind this grand cru (elevated from premier cru in 1992) was deeply underwhelming which was a particular shame for the friend who generously volunteered the bottle. The overall impression was that it was one dimensional but I couldn't describe the dimension apart from saying it was flat. The nose offers a bouquet of plum, suede, slate and toffee. There is plum and cherry fruit on the palate but the wine falls apart quickly. It's astringent and dried out. For the record, none of the four people tasting the wine (including a sommelier) considered this wine to be off. It just had not aged well. Having tasted at the domaine and subsequently tried their Clos de Vougeot and Echezeaux it's clear that their wines from the noughties were not well made. Given these will appear on wine lists at $300-$1,500 per bottle they should be avoided. Whilst one of their wine merchants (Lay & Wheeler) says the 2018 La Grande Rue is now back where it should be "among the [Vosne] appellation’s very finest wines" they then describe the aroma as: "citrus fruit, cinnamon spice, pomegranate, grapefruit and fresh almonds". And this is for a pinot noir grand cru? At £570 per bottle retail I do not think the scarcity value and label envy is worth it by a long shot! Strong avoidance manoeuvres recommended.
Labels: La Grande Rue