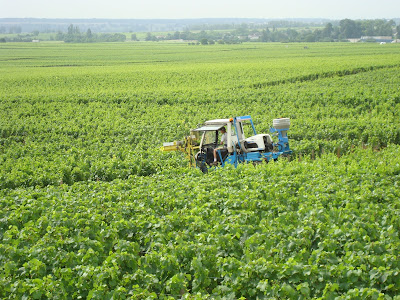 We visited the Domaine Bouzereau-Gruère in 2017 and enjoyed the tasting. Subsequently one has the sense that the wine-making isn’t entirely perfect but the price of the wines probably betrays that fact. A bouquet of oak, hazelnut and yellow apple. Evolves to orange, lemon and celery. A slightly bum note. On the palate this Meursault 2013 has good pear and red apple fruit with a trace of bright tangerine. It’s still quite tight which is a surprise. Rather light bodied for a Meursault. My hypothesis is the grapes were picked slightly too early and slightly too much new oak was used in vinification resulting in a thin wine wearing too much vanilla perfume. When one is hoping for an evening with Emanuelle Béart it’s disappointing to end up with Calista Flockhart. Scores 75/100. Photo is from July 2010 in the Meursault vineyards on the Volnay side of the village.