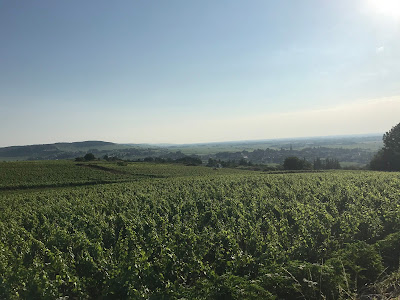 The Château de Meursault has a phenomenal range of wines and in difficult vintages, producers with vineyards in a wider range of villages who produce larger volumes can have more ability to deal with the impact of frost, hail or disease. This Meursault village wine from the Clos des Grands Charrons was certainly the case. An initial nose of pear, Cox's apple, perhaps fresh coriander and even a hint of lettuce (!). Far more open than the bouquets of other wines. This is a flattering wine on the palate. Juicy, round, satsuma, lovely fruit (not a comment one could make often about 2016 white Burgundies), a satisfying edge of acidity, minerality and good longueur. Priced at £480 for a case of 12 bottles in bond which is £50.60 per bottle retail and the same level as the Puligny 2016 from Etienne Sauzet. Worth bearing in mind it's possible to buy bottles of Grand Charrons from Meursault producers at the cellar door for 20 euros. Scores 72-77/100 which is an excellent score for a village level wine in 2016.
Labels: Meursault