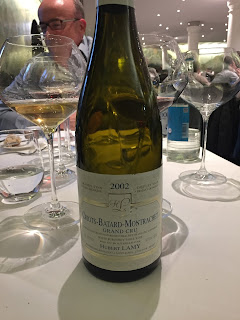 Tasted blind at the Rex Whistler restaurant in the Tate Britain art gallery, this grand cru immediately showed its class. Dried chanterelles mushrooms, manuscripts from an old college library, dried pineapple, marzipan, hazelnut, baked clementine, very ripe apricot, stollen, a hint of cloves. golden sultanas, icing sugar, flapjack. On the palate this 2002 grand cru shows its maturity and its quality. A genuine grand cru-level concentration, thick layers of candied and dried fruit, baked apple, glorious texture, an edge of amontillado sherry. I guessed this as a Chassagne "Clos Saint Jean" 2001 and awarded myself a few points given Criots is the only grand cru located entirely in Chassagne and Clos Saint Jean is only 600 metres up the slope. Still, should have spotted the impressive concentration on the palate and thrilling aromatic complexity as grand cru characteristics. The bottle was provided by the one and only Peter Broadthurst and boy is Criots hard to find given its a 3.9 acre appellation producing just 10,000 bottles a year.
Labels: Montrachet et al