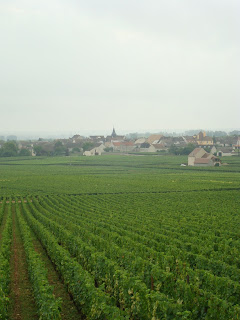 In 2010 the Louis Carillon estate was divided up between the two brothers François Carillon and Jacques Carillon creating two new Puligny domaines out of one legendary one. Having met with Jacques Carillon some years ago we felt it would be good to visit his brother's domaine one fine morning in July. This Puligny 2011 villages has a splendid lemon nose, still fairly closed despite our urging. On the palate the ripe lemon flavour continues with an underyling minerality. This Puligny chardonnay has focus, definition and an upright personality. This wine is certainly the inheritor of the Louis Carillon style. Linear without being sharp, mineral without being crisp. A Puligny of the mind. Scores 24-26/30 for a Puligny. Photo shows Puligny vines in July 2011.
Labels: Puligny-Montrachet