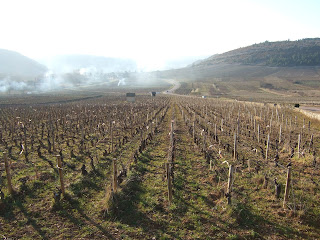 Tasted in Meursault with Elsa, one of the two sisters who work with their father Thierry, managing this large (by Burgundy standards) domaine, this Meursault 2011 starts on a chalky nose with a hint of boisé despite the wine being aged in fûts of at least one year. The 2011 vintage was fairly precocious and the grapes were harvested at the end of August. Despite a similarly hot spring as 2007 there is less acidity in the 2011s resulting in earlier-drinking wines. This Meursault 2011 is mineral, there are some sharp edges, grip on the finish with a range of apple flavours. Good overall lacks flesh and may not achieve as much complexity as in classic vintages like 2004, 2008 and 2010. Scores 21-23/30 for a Meursault.
Labels: Meursault