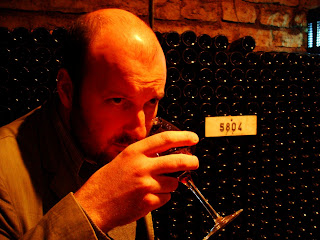 Finally I have received a tasting note from the trusted palate of the Sage of Saffron-Walden, T. Cobbold III also known as the Duck of Norfolk. I am at a loss to explain why, but the 2006 vintage seems to have been something of a wash out -- too soft, no jagged edges, a lack of acidity and minerality. This has resulted in some underwhelming wines. But some have delivered better than others and according to the sage this Corton-Charlemagne 2006 from Domaine Jean-Jaques Girard in Savigny is a winner. I quote: "Initial notes of wild chestnut and mincemeat gave way to cinnamon, apple, dried apricot, black fig and a touch of pastry cream. Structurally sound in weight, length and balance, a touch flat perhaps but on the whole very pleasing. Has restored some faith in '06 which in red always seems to under deliver, you generally sense overall promise but then find the fruit lacking." Founded in 1529, the domaine still has one parcel planted with 300 year old pinot meunier and gamay vines which produces one of the best kept secrets of Burgundian wines. Strict allocation rules apply of course.
Labels: Corton-Charlemagne