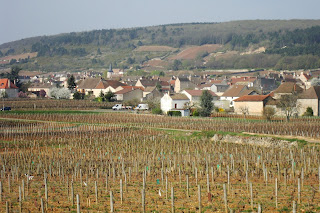 The Carillon family is one of the legendary domaines in Puligny. They trace their roots in Puligny back to the XVIème century whereas the Metcalfe implantation in Puligny dates from the XXIème century. Marriage and a name change are the only option. As the excitement builds in the palates of my thirsty friends one week before the annual Burgundy tasting trip they are reaching into the nether regions of their cellars to fine tune their taste buds prior to their glorious arrival on la Côte. The Duck of Norfolk tells me: "The saline, alkaline palate is there in abundance on the back of a slightly smoky nose. I'm tempted to put icing sugar and silage in the same sentence, there's such contrast between dark and light notes. Little appreciable fruit though orange zest comes to mind, together with suggestions of almond cake and aniseed. It's full, warming and certainly "no hardness". Ce n'est pas un vin gouleyant. My wife quickly shifted focus to a Paarl pinot as news of Nelson Mandela's frail health was broadcast. A wine of its terroir, this feels like it's been made by a geologist in the Bruno Clavelier mould." Will be interesting to compare and contrast the wines from the two sons of Louis Carillon, François Carillon and Jacques Carillon who divided the vineyards between them in 2010.
Labels: Chassagne-Montrachet