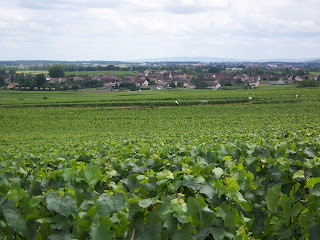 This domaine has carved out a niche as a producer of white Burgundies with incredible longevity. One would have to classify the domaine as eccentric. Certainly it has been fascinating trying the 1966, 1971 and 1985 prior to this "youthful" 1992. Despite being 20 years old this Meursault-Charmes had a lively nose of crushed oyster shells, dried lemons, apple, a hint of salt and manzanilla. Wonderfully integrated on the palate, there is still fruit there, it is soft just as a "charmes" should be, there is personality, a chalkiness and conjures an image of Vanessa Paradis wearing an ivory-cream cashmere sweater. Fascinating. Scores 23 / 30 for a Meursault 1er Cru. Photo shows Meursault Charmes in June 2007.
Labels: Meursault