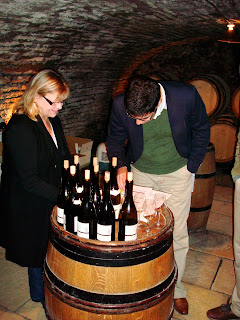 One of the many good things about blind tasting is that the wine's label has no impact on one's appreciation of the wine. I confess though that I am a sucker for labels which evoke Bacchic riot and the Javillier label has more than a hint of over-flowing Roman amphorae. This 2007 red Savigny 1er Cru has a glorious rich red colour with a rim of hen pheasant plumage. Announced by red currant coulis, blood orange, cinnamon, marjoram -- sweet herbs on the nose -- the dominant flavour is of wonderful pure red berry fuit ending on touches of pomegranite. Fully evolved. A vin digeste which is representative of the 2007 vintage. Consume by the end of 2012. Photo shows the renowned Piemonte specialist Ammar getting a lesson in pinots in the Javillier cellar in Meursault.
Labels: Savigny-les-Beaune