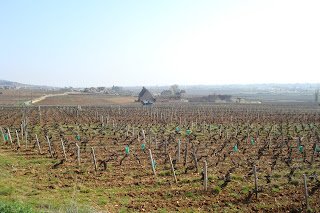 This is a red Chassagne from 2004 which was gloriously mineral in chardonnay and struggled a bit in pinot resulting in early maturing wines. Tucked away at the back of my cellar I discovered this pinot only by holding the bottle up to the light of a large candle. Soft cherry and plum aromas. Hints of licorice, cinnamon. An edge of blood orange. A subtle touch of cooked apple and blackberry. Good fruit structure and mature tannins. But the core is drying out. Drink up your 2004 pinots! An interesting lesson is that in tricky years for pinot head south to the Cote de Beaune. Some Cote de Nuits 2004 reds from good producers were really green.
Labels: Chassagne-Montrachet