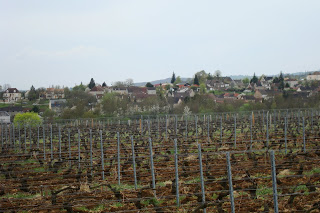 So far my foray into the wines of Maranges suggested the reds are incontrollable tannic monsters. "Once more unto the breach dear friends, once more; or close up the wall with our English dead" so said Henry V (according to Shagsbeard). This Maranges starts well in the glass with a really appealing, thick, red consistent colour. Then defeat. Cherry mixed with twigs, bark and other things rustic. Huge tannins, tangy, astringent another monster. I'm not sure this promotion of Maranges wines had the desired effect! The photo shows the Maranges vineyards from the road to Santenay via which route I beat a hasty retreat to mon cher Puligny.
Labels: Maranges