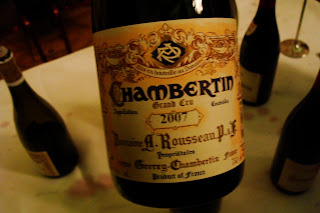 Courtesy of the Justerini & Brooks Burgundy 2007 tasting. Armand Rousseau owns the largest parcel of vines in the Chambertin vineyard -- a whopping 2.2 hectares which would be a postage stamp on the corner of Château Margaux. I often think that the people of Gevrey should have elected to call the village Gevrey-Bèze not Gevrey-Chambertin since the Clos de Bèze is more complex and noble than the foursquare Chambertin. This Chambertin is impressive: potent fruit, velvety texture, rich like a Rothschild banker and excellent length. But not distinctive right now.
Labels: Gevrey Grand Cru