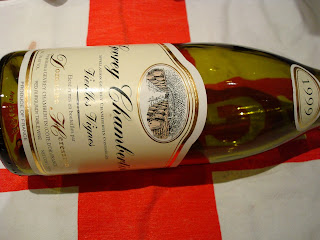 We tasted a trio of Heresztyn Gevreys blind and this 1999 was below par compared to the outstanding Gevrey 2001 and the impressive Gevrey 2000. The 1999 vintage was touted as a big year due to the ripe fruit and strong tannins. The nose was muted -- very little showing relative to the 2000 and 2001. Decent on the palate but not spectacular. Do the 1999s struggle to escape from the shroud of tannins? Other wines like this Nuits-Saint-Georges 1999 from Jacques Cacheux exhibited similar hermit-like symptoms.
Labels: Gevrey-Chambertin