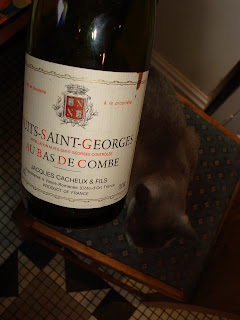 What could be better than Nuits-Saint-Georges with friends and an autumn stew? Two bottles of Nuits-Saint-Georges from the same vintage with friends and a really tasty autumn stew. This first wine impressed with its dense plummy colour. A strangely muted nose composed of earthy tones, chalk and scrapings of lichen. Hard to see how the wine will release more in the future. Thick black cherry and bramble fruit offering breadth rather than finesse. This is a chunky, rustic wine. Enjoyable but not thrilling. Similar to the other wines from the domaine such as the Vosne-Romanée 2003 and the Vosne-Romanée 1999.
Labels: Nuits-Saint-Georges