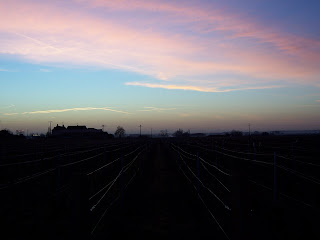 This Meursault is tricky to decipher. Its an unfiltered wine and seems to have retreated back into its den like a badger with a secret. Clear similarities with the Auxey Duresses 2004 from the same producer. The wine has a thickness, concentration and promise which is intriguing. Clearly vinified for medium to long term aging. The minerality, citrus fruits and class will show through from 2010. Makes one wonder whether other white 2004s should be left untouched until November 2009. The Coche-Bouillot domaine shows all the signs of being a high quality and conscientious producer. The photo shows an early-morning Meursault sky in February 2008.
Labels: Meursault