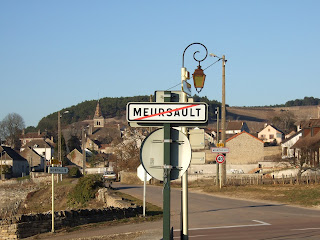 This domaine is located opposite the gates of the Chateau de Meursault and there are several branches of the Chouet who produce wine in Meursault. After buying the wine from the domaine I noticed the ullage was lower than would be expected on a 2002. Ugghhh... the first pour (as that annoying idiot in Sideways says) delivered a brassy deep gold liquid into my glass. Oxidized nose, dry autumn leaves, manzanilla sherry, sulphur, you know the rest. Why the tasting note? I've never had such a badly oxidized white Burgundy which suggests vinification problems rather than just a dodgy cork. I'll give Bernard Chouet's wines a second try but this is worrying. Especially since none of the domaine's wines have been in the Guide Hachette for the last 5 years (ie not a top-third producer). To coin a phrase "Don't give me the god damn corked meursault!"
Labels: Meursault