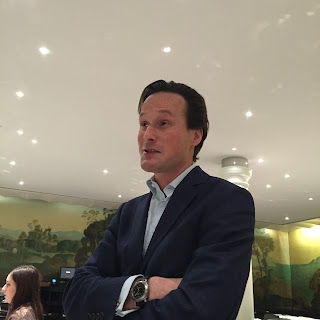 Every year the Golden Slope Society (total three members) gets together for lunch at the Tate Britain restaurant in the room painted by Rex Whistler when he was just 22 years old. As you would expect for someone educated at Haileybury and Imperial Service College, despite being an artist he volunteered to join the army in the second world war and was killed in action in Normandy. Who knows what other wonderful murals he could have painted? This was the first Burgundian wine tasted on the recommendation of Hamish (pictured) the long-standing sommelier at Tate Britain. Impressively fresh given it is seven years old, lemon dominated, mineral, classic Puligny. Very much enjoyed but lacks the texture, concentration and complexity of  Pulignys from the likes of Francois Carillon, Jean-Louis Chavy, Sauzet and Leflaive. Since the domaine was only started by the Bachelet brothers in 2005 it may not be until we try the 2013 vintage that their vineyard work and wine-making skills fully show through. Scores 21/30 for a Puligny 1er Cru.
Labels: Puligny-Montrachet