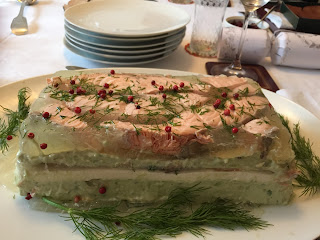 The "Clos du Cromin" lieu-dit is on the north side of the village and abuts the Meursault vineyards which are permitted to produce red wine as well as white wine. This reflects the heavier clay soil in the valley floor and the increasing amounts of iron -- a dominant feature of Volnays from the lower parts of the golden slope. Leaving a non premier cru Meursault for eight years is not often recommended by wine makers but in the 2007 vintage I figure that the excellent underlying acidity would permit longer ageing. Was I right? Definitely with this bottle. Even though Javillier's wines are glorious after just 2 to 3 years this 2007 had matured gracefully. Dominant citrus nose, hints of marzipan, hawthorn flowers and possibly lavender. Still lively on the palate without being acerbic in any way as many 2007s were in their youth. All elements melded together perfectly and proved to be an excellent companion for a double salmon terrine. No wonder the British royal family imbibe these wines at their own festivities. Scores 25/30 for a Meursault villages. Worth checking back to the tasting notes for the 2007, 2009 and 2013.
Labels: Meursault