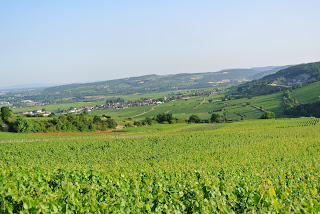 As with many Burgundy domaines, the name on the label does not relate to the people making the wine but their progeny. In 1993 Thierry Amiot took over the wine-making from his father Guy, and more recently Thierry's brother Fabrice returned to Chassagne to lead on the commercial front. Whilst the Domaine Guy Amiot does not have a huge brand name the potential is there: the portfolio includes Le Montrachet, eight Chassagne premiers crus and Les Demoiselles in Puligny. The Chassagne 2011 starts on lemon notes with a hint of pine. But its still fairly closed. Reflecting the house style which errs on the side of richness, this Chassagne, matured 30% in new oak barrels, has a rich texture with orange and clear cherry juice flavours. Everything is there for a splendid, full-throttle Chassagne in 2015. Scores 24-27/30 for a Chassagne. Photo shows Chassagne vineyards and the village in July 2013 from the Mont-Rachet hill.
Labels: Chassagne-Montrachet