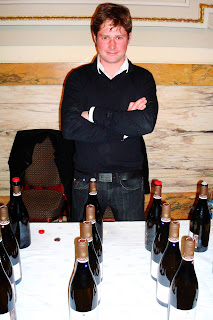 Courtesy of the Justerini & Brooks Burgundy 2007 tasting. This is an exciting new domaine established in 2005 by brothers Marc and Alexandre Bachelet. The brothers have 10 hectares of vines to dabble with. The Bachelet frères have produced a splendid Puligny 2007 -- immediately open, apricot, biscuity, warm and oaky. The grapes were picked on September 16th and aged in 30 per cent new oak barrels which explains the richness, spice and length. Likely to hit its apogee fairly young in say 2012.
Labels: Puligny-Montrachet