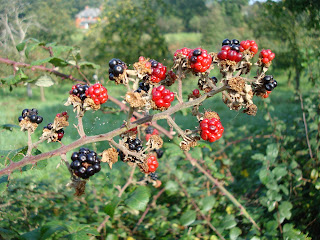 Following up on the recent 1999, 2000 and 2001 it seemed rude not to tuck into this 2005 Gevrey from the same domaine. This vintage has been billed as the greatest since 1982 (in Bordeaux) and the wine media has glibly assumed this means 2005 red Burgundy is also stunning. Actually, no. The 2005s are plump, enjoyable and early-drinking. This Gevrey is no exception. Very fragrant, morello cherry and mixed Glastonbury hedgerow berries (see photo). Lashings of ripe cherry fruit with enlivening cloves and cinnamon spice. A lovely wine but too ripe to be a classic.
Labels: Gevrey-Chambertin