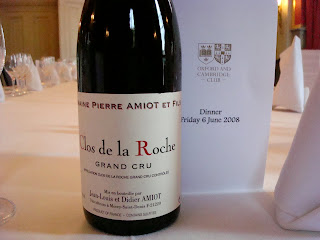 We tasted this Clos de La Roche grand cru 2004 from Domaine Pierre Amiot at the Oxford & Cambridge Club during a blind tasting dinner for the Cambridge Bufties. The 2004 vintage was a challenge for producers of red Burgundy due to a lack of sunshine and an excess of rain during the vendanges. I bought this grand cru from the domaine in Morey partly because of the good price... now I understand why. Once poured from the bottle the colour is a dilute orangey red and the nose dominated by blood orange. The citrus / red berry fruit aromas are not unappealing its just that this wine has nothing like the concentration one would expect from a Côtes-de-Nuits grand cru. At this stage this wine should have potent fruit and tannins -- I don't expect it to acquire more weight as it ages. Very poor when compared for instance with the Clos des Lambrays 2000 which is a great example of a fascinating wine vinified in a tricky and lightweight vintage. 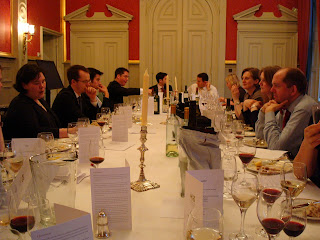