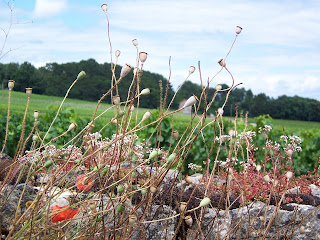 The Champ Canet 1er cru lieu dit is on the northern edge of the Puligny appellation bordering the Meursault-Perrières vineyard. The wine is fruit-dominated offering ripe peach and sweet honeydew melon. The style is flattering rather than racy and has all the elements to produce a full and buxom wine by 2010. Less minerality than its sister wine Les Referts which is located just a stone's throw down the slope. The Champ Canet is 15% more expensive than Les Referts but the latter showed better in the Justerini & Brooks tasting. Photo shows some dried poppy husks in a Puligny vineyard shot in June 2007.
Labels: Puligny-Montrachet